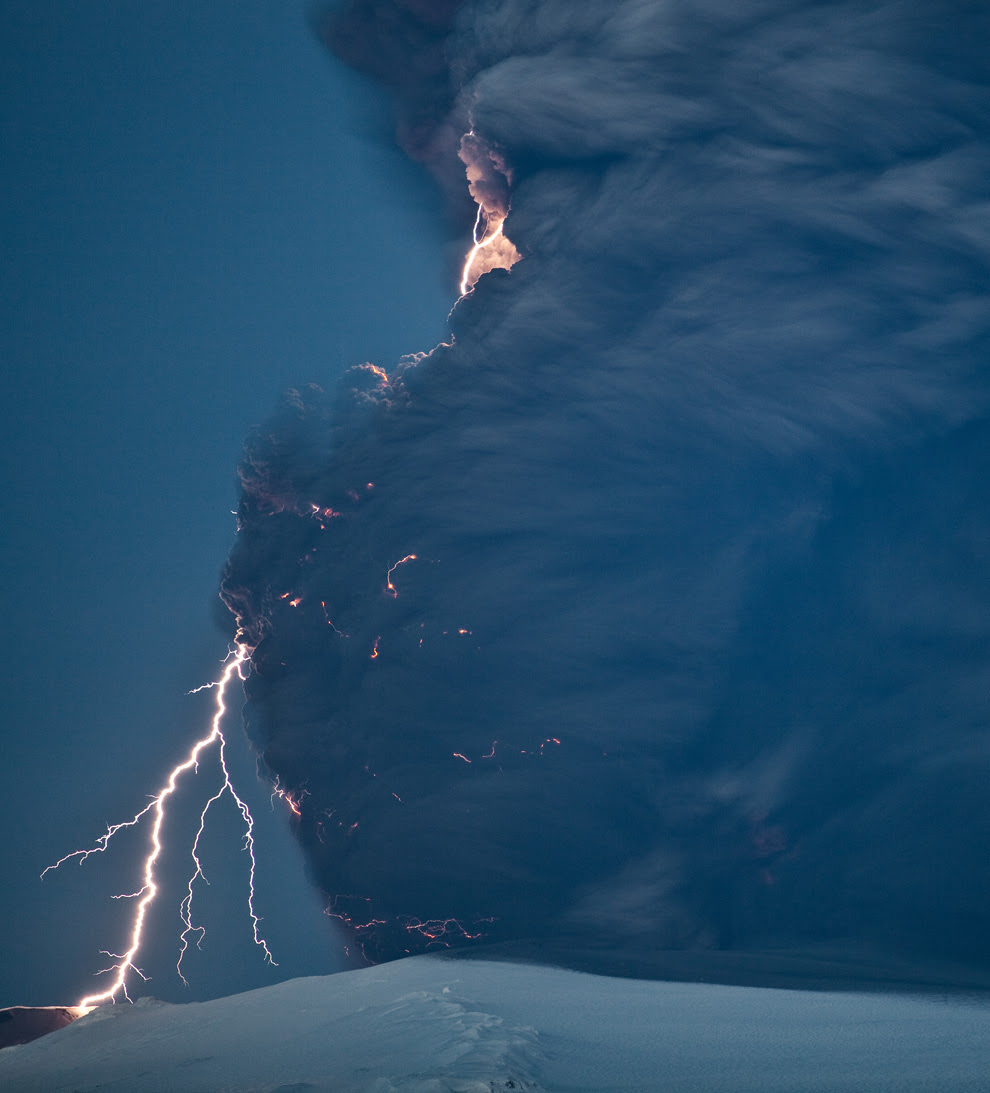 The Austrian ethologist Karl von Frisch was the first scientist to decode the "waggle dance" of honey bees, which informed their hive mates of the location of food sources. A description of the bee dance can be seen here.

The Advanced Bio class had to come up with their own dances using the bees as inspiration to find their candy "caches" hidden around campus. The results can be seen in the video below....

An amazing story on the Sky News website this morning - a woman from Plymouth in England who suffered from migraines suddenly started talking in a different accent. Her normal voice would have sounded a bit like Mike Davis's accent, but now she sounds like she has a mix between a Chinese and Eastern European accent. Check out the story and video here.

There have been only 60 recorded cases of Foreign Accent Syndrome, the first being a Norwegian woman who suffered head injuries during an air raid during WWII and subsequently started speaking with a German accent (people in her town then suspected her of being a spy).
Posted by Dan G at 10:02 AM No comments:

The Immortal Life of Henrietta Lacks 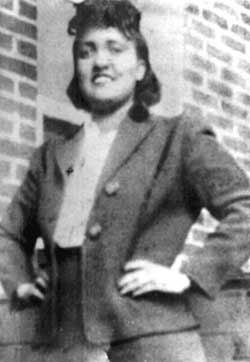 HeLa cells, a line of immortal human cells, have a long and murky scientific past. They also have an important human in their past, Henrietta Lacks. This new book, by a woman who grew up in Portland, explores both stories.

The following is a thoughtful review by sophomore Ilana:

The Immortal Life of Henrietta Lacks by Rebecca Skloot is not a science book, nor is it a book about the people who study science. It is about the rest of the people. Those who depend on science, and on whom science depends: the people who require and test the solutions science promises, and the ways in which they are often not given the chance to be involved in scientific studies on their own terms, in part because they have not had the education to be able to understand the information which would make up “informed consent”. The topic of the book is the mass of cells which Henrietta’s cancer biopsy has grown over the last 50 years and the medical advances those cells have enabled, but the point of the book is to not be a science article to add to the 60,000+ (Skloot, p.312) articles concerning the cells which have already been published. The point of the book is to tell the story of Henrietta in human terms in equal parts a way for her family to come to terms and to an understanding of what was done and why her cells are famous, and recognition of all of the unnamed people whose bodies have contributed to scientific achievement. Read this book to learn about the horrific clinical trials and inspiring scientific discoveries. Read this book glimpse the technicalities which have limited the abilities of lawyers to enact informed consent laws and to be awed by the life Henrietta’s daughter displays even after a childhood of abuse. This is a people book to be recommended for its scientific value and its capacity to spark interest in fields from reporter, to lawyer, to scientist to human rights activist, and, if for no other reason, to carry on the legacy of the person Henrietta who unknowingly gave her genes to scientific progress.

Volcanos = Good for the Environment? 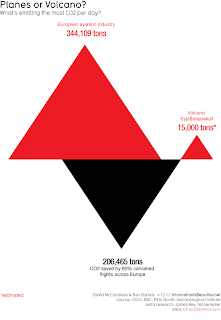 A predictable side effect of the eruption of the Eyjafjallajökull volcano in Iceland on 14 April 2010 was significant air traffic disruptions all across Europe, the largest airline shutdown since WW II.

A less obvious result is that the carbon dioxide emissions regularly caused by these flights have been suspended, and even though the volcano is emitting 15,000 tons of carbon dioxide daily (small red triangle), that's still far less than the airline traffic regularly generates (giant red triangle).

data from: http://bit.ly/planevolcano
Posted by Veronica at 10:09 PM No comments:

In response to a homework challenge to formulate a creative interpretation of DNA replication, a couple of students went the extra mile and wrote musical compositions - the first one featured here is by by Vignesh (CO 2011).
Here, in Vignesh's own words, is a quick rundown on what it represents...

The rigid drum rhythm represents the nigh-mechanical nature of the DNA
replication process.
The two piano melodies at the beginning together represent the spiraling
double helix of DNA.
The harsh, distorted part represents the helicase breaking up the double
strand.
Afterward, the organ chords represent the the RNA primer.
The legato layered piano represents the leading strand from 5' to 3'.
Then, the staccato piano and the slower, somewhat arrhythmic drum beat
represent the "fragmented" lagging strand from 3' to 5'. This part is
more repetitive as the process is more repetitive.
The two piano melodies come back, but in stereo and with different
timbres, to represent two DNA helices, the products of semiconservative
DNA replication.

The second piece, submitted by Paul (CO 2011) is described as follows:

At the beginning, nothing is happening to the DNA. Then helicase separates it with staccato dissonance. Binding proteins are a sustained, rising melody. (We modulate down 1 half step to E flat. E natural represents completed DNA. Primase gets everything started on the leading strand with 3 sharp chords, and then polymerase 3 makes some chords as the rapid notes are the new strand of DNA forming. An E natural chord indicates that the strand of DNA has formed. Primase then starts the lagging strand (same 3 chords) and Okazaki fragments are formed as polymerase 3 makes more chords (back to E flat here). Ligase smoothly joins the Okazaki fragments with arpeggios. At the end, it resolves on E because the DNA has finished replicating.

Thanks to Veronica for sending me this for submission.
Posted by Dan G at 3:20 PM No comments:

Every month, OMSI organizes a Science Pub, an informal science lecture in either the Bagdad Theater or the Mission Theater - it is for over 21's, and is described as follows:

Learn about cutting-edge topics in science and technology from leading researchers and scientists, all while enjoying food and drinks. Don't expect a remote speaker behind a distant podium. Instead, experience an informal atmosphere where you can interact with experts and where there are no silly questions. No scientific background is required; just bring your curiosity, sense of humor, and appetite for food, drinks, and knowledge!

The next topic is about forensics, and those who did 8th grade science with Pongi or enjoy CSI-style TV may be interested by this upcoming lecture:

Learn the “Top 10 CSI Myths” and hear responses to each from a real forensic scientist. This Science Pub will focus on the major areas of forensic analysis, including firearms, latent prints, drug chemistry, and DNA.

Kori Barnum is a scientist at the Oregon State Police Forensic Laboratory in Clackamas, with a background inanthropology, firearms identification, and forensic biology (examining physical evidence for biological stains.)

Several of the current science faculty intend to be there, so any Catlin Gabel alum that fancies an evening of forensics in the company of Mr Science, Pongi and others should come to the Bagdad Theater on Tues 27th April - doors open at 5pm for a 7pm start and you need to get there early to ensure a seat.
Posted by Dan G at 2:46 PM No comments:

Here is an interesting little article about how global warming has shifted the balance in a Colorado ecosystem.

Here is a video of the volcanic eruption in Iceland.


Also, here is the link to a NYTimes article with a bunch of cool maps and such.

Today we hit the landmark number of 1000 page views in our first couple of months. Thanks to those of you that have taken an interest, and I'll keep pestering our contributors to post the fascinating things they find. Remember - if you come across an interesting science story to share, let me know and I'll get it posted.

Some other interesting stats:

- We have been visited by readers from 17 countries from 4 continents (we are still waiting for S America and Africa to join the party.....)

- Most readers just visit the main page, but the next most popular page is the Chemistry Magic Show video
(statistics courtesy of Google Analytics)
Posted by Dan G at 8:26 AM No comments:

Oxidate It Or Love It

This video was sent to me by Bhakthi Sahgal (CO 2009), who suffered through respiration with me in BPC III. It seems my more traditional teaching methods were no match for the rapping skills of a Stanford student and his Bio teacher. Apparently, the video pays homage to "Hate it or love it" by 50 Cent/The Game and "On to the next one" by Jay-Z (I am told that they are famous rappers). Those in Science I might like to check their knowledge by reviewing their Energy notes whilst listening to this catchy tune.