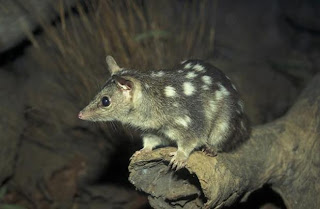 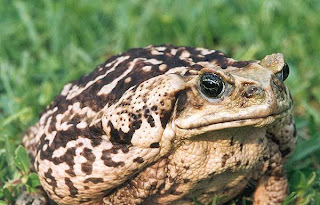 I just read a tidbit about this project on the Smithsonian website and dug up the research article to learn more. Here's the gist:

The northern quoll, an endangered marsupial native to Australia, is doing itself no favors by eating the tasty but poisonous cane toad, an invasive species that is rapidly moving into the quoll's habitats. As the toads move into quoll territory, the quoll population crashes. The toads are so pervasive that removing them from the environment isn't a feasible way to protect the quolls.

A recent research project found that conditioned taste aversion might be a useful way of preventing the quolls from eating the toxic toads. Scientists painted dead toads with a nauseating, but safe, chemical and fed them to quolls, who learned to associate the ensuing tummyaches with eating the cane toads. Released back into the wild and tracked with radiocollars, these toad-smart quolls lived five times as long as toad-naive quolls, presumably because they were now smart enough to not eat the toxic toads.

Conditioned taste aversion is well-known learning paradigm in neurobiology research, but this is the first time I've seen it suggested as a mechanism for preserving native populations when an invading population cannot be eradicated from the environment. Neat!
Posted by Veronica at 11:28 AM No comments:

Weird and Wonderful Mammals I and II: The Hispaniolan Solenodon and the Slow Loris 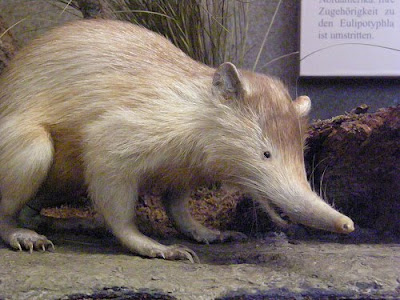 The Solenodon: A very weird mammal
Inspired by a recent senior project that involved working on documenting endangered species in the United States, I thought I would start a series of posts about the rare and unusual animals that few people have heard of, starting with the Hispaniolan solenodon. Its name sounds more like that of a dinosaur than a mammal, and that is pretty appropriate - it is thought that this furry little sniffing machine has changed very little in the last 75 million years and something similar to its current form co-existed with the dinosaurs. They are found, as the name suggests, on the island of Hispaniola and are threatened by deforestation in Haiti. There is a great video of the solenodon here. 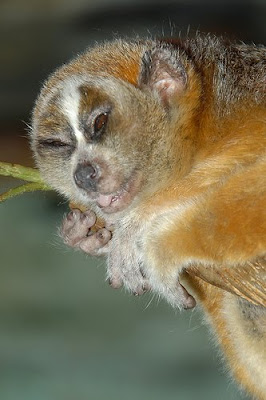 What makes it particularly unusual (and therefore eligible to be featured under the title of this post) is the fact that it is the only mammal that can inject venom through its teeth (any type of venomous mammal is fairly rare - platypuses have poisonous thumbs and slow lorises produce an allergen in their armpits and I'm sure there are probably a few others). For those of you unfamiliar with slow lorises, you might enjoy their response to being tickled.....

Left: The slow loris has allergenic armpits - it licks up the allergen then bites potential attackers.


Below: How does a slow loris react to being tickled?