Anyone else noticed the abundance of small organisms in the news lately? Let's take a tour, starting with the leaf chameleons from Madagascar, which are described as an "extreme case of island dwarfism" at less than 30 mm, full size. A recent PLoS ONE article describes them. Here's a juvenile: 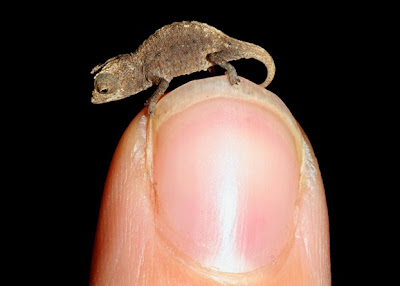 Next, here's a recently discovered terrestrial frog from New Guinea, described as "the smallest known vertebrate species, attaining an average body size of only 7.7 mm" in a different PLoS ONE article. These itty bitty frogs are described as likely prey for scorpions and other large invertebrates.

Speaking of invertebrates, the fairy wasp is one fifth of a millimeter long. Note the scale bar in the photo! Even more interesting is that the adult wasp's nervous system has just a few thousand neurons, most of which do not have nuclei. The juvenile cells seem to accomplish enough protein synthesis before losing their nuclei to last through the wasp's 5 day adult lifespan.

This guy seems giant in comparison, and he'll certainly grow more, but Lil' Drac is an adorable short-tailed fruit bat, abandoned by his mom, but cared for by humans. These videos have a pretty high awww factor.